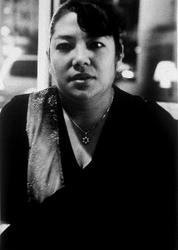 The Oral History of Guadalupe Ramos

Reprinted from "Remnants of Crypto-Jews Among Hispanic Americans" with permission of Gloria Golden, the book's author

When I went to Rabbi Leon, I told him that there is no way I can prove I'm Jewish, no physical proof. The first thing that I ever saw that was Jewish was a Seder for Passover. This was in a Protestant Church. I grew up Catholic. They had a special speaker who did the Seder. He explained the Seder, meaning of everything, and said he worked with elderly in Florida.

I thought we always say that God is the same, the God of Israel. At the Seder, I was wondering why the Seder is so different than anything celebrated in other faiths, Catholic and Protestant. If we worship the same God, why are we not all celebrating Passover the same way? I started to be interested in the Old Testament. That Seder was an awakening for me and brought a lot of questions. I started wondering about things that happened when I was pregnant with my son at the time of the Seder.

A few months later I moved behind the Holocaust Museum in El Paso. The Jewish Community Center is behind my house. I had been meaning to go visit. One day, after shopping, I decided to stop by and go in. It was closed and a lady said they had a lot of things to offer there. They had Israeli dance classes, cooking, etc. I called a week later and went to a dance class. The strangest thing is that when they started playing the Israeli music, it was my favorite song, Moreinu (my teacher). I started to get a knot in my throat and didn't know why. I asked myself, "Why do I feel like this? Why am I so emotional here?" I couldn't talk or I might burst into tears. It was like that for six or seven months. I thought I might not go back. I kept going back, and it took about seven months to learn the dances. So that was my first encounter with Jewish people. Then there was an announcement on television for a Messianic Jewish place. I went and remember walking into a Shabbat service, and they were taking out a Torah. I had no idea what they were doing. I wanted to cry. A lady came and hugged me and said, "You have a Jewish heart and you're probably Jewish." I was there every Saturday. I thought, "She doesn't know what she's talking about." I'm Mexican. Mom is from Mexico. I was born in Fabens,Texas, forty-five minutes from El Paso. Father grew up there too. I kept going to the Messianic synagogue. Then this man told me, "You're probably Jewish. Did you notice a lot of Mexicans are Jews?" I thought that's strange. He said, "I see you here. I think you have a Jewish heart. I bet you have some Jewish blood in your background."

He gave me a book on crypto-Jews, descended from the Inquisition. It had last names and told how they were changed. I found my mother's last name, Guzmán, and father's last name, Gutiérrez. Falcón and Castillo are names in his family. They were found in the book. I thought this incredible and thought now I'll talk to my mother. She said I was crazy. "We're not Jewish". My mother's history is sad. She was orphaned at eleven months and raised by a Catholic family. She was born in Jiménez, Chihuahua. She told me, "I don't know much about my family, and my father left for the United States to work and never returned (my Grandfather Guzmán)."

The thing is we grew up Catholic. I want to find out. I called my aunt, father's sister, and asked if she could tell me anything about my background. She created a family tree on my father's side and went back to Galicia, Spain. She didn't know if we were Jewish. That's all the information I got. Maybe I'm nuts I thought. I started a support group for crypto-Jews at the Jewish Community Center. That's how I met Rabbi Leon. We ate in the sukkah one day. I had seen a movie called Song of the Sephardim. It started when they were expelled from Spain and told of the places they settled. It told how the Sephardim had to hide their heritage and practice rituals in private. All these things didn't show me for sure that I was Jewish, but made me want to convert, I spoke to Rabbi Leon, explaining what I've been going through. My two daughters and my son converted. My husband didn't. He has been practicing Judaism for seven years and will eventually convert.

On 9/11, a miracle. My mother went to visit an old lady who grew up with her father. Her family helped my mother's grandmother (my great-grandmother) and her father (my grandfather), mother and son. They were talking about the horrible Twin Towers and kids not being sent home. My mother said, "My grandson , Lupe's son, was sent home when 9/11 happened." The lady said, "Why was he the only one?" My mother, Lupe, said, "He is the only one of her children in a Jewish school and the Jewish Community Center has kinder day school." (From there, the children would go to Hebrew Day School). The lady, Socorro, asked, "Why is he in a Jewish school?" My mother relied, "Didn't I ever tell you that my daughter converted to Judaism ? She's Jewish." Socorro said, "Isn't it strange that your blood calls you back to your own blood?" My mother said. "What are you talking about?" Socorro responded, "Didn't they ever tell you that your father and grandmother were Jewish?" My mother said, "No, no one mentioned anything."

One day my mother's grandmother came into the town's (Jiménez) main street, holding a little boy's hand (he was about four years old). They didn't know anyone. They went to Socorro's house asking for a place to stay in and helped them with food. My mother's grandmother started washing clothes and doing things for people so that they could survive. Socorro was little at the time, about seven, and she started visiting them a lot. She said she would see this lady light candles one day on the weekend, every weekend, and bake a bread. They would also eat this round bread, flat like a tortilla, only during Passover. During Pasqua (Passover) they ate this special unleavened bread. She would also tell Socorro's family to cover the mirrors when someone died. Socorro told mother that my great-grandmother (Columba) swept toward the middle of the room. My youngest daughter does this just by herself.

Socorro said that when my Grandfather Guadalupe was seventeen years old, his mother was murdered. My mother asked why she was killed. She said because Great-Grandmother was Jewish. She didn't go to church or do anything the others did in town, a very small town. This was probably in the early 1900s. No one investigated anything. Socorro knew the reason. Nobody knew where my great-grandmother came from. Socorro only knew that they were Jewish. Mom never knew.

My mother called on September 11, with her voice breaking on the telephone, after visiting Socorro and said, "You're not that crazy after all." She said,"How did you know (meaning that we're Jewish)?" I said "I didn't." This lady, Socorro, is still alive. I visited her and she said my youngest daughter looks like my grandfather (Mother's father).

Father died when I was seven. His family doesn't call us. We just have me, my brother, my mother, and that's our family. Father's father is from New Mexico. Grandmother is from Arizona. Father's sister has all this information from Galicia.

The lady that raised my mother called me Judia-errante (wandering Jew) when I was growing up. She never spoke of anything. She, Francisca Jordan, was a very good friend of my grandmother. That's why she raised my mother. Francisca never adopted my mother, and Mother did not know why.p ">

In a recent correspondence to Gloria Golden, Guadalupe Ramos conveys how her story has evolved…

"Since we last met, my family and I are still members of B'nai Zion, I have learned to read Torah and have done it a few times during the Holiday of Sukkot, for Sisterhood Shabbat, and for the Anusim yearly conference. Also about 5 years ago I started baking Challah at synagogue for the Shabbat services, holidays, and Friday night dinners. Last August, after I had surgery, I stopped. Both my daughters are married . . . one had a Jewish wedding. Both my grandsons had a Brit. My son had his Bar-Mitzvah with Rabbi Leon, and I did my Bat-Mitzvah along with some adults 3 years ago.

At home I keep a kosher kitchen. We have Shabbat every Friday, we celebrate all Jewish holidays. We have a Tu B'shvat seder, and Pesach seder. I attend Shabbat services but lately, for health reasons, sometimes I stay home and I do my Shabbat prayers and Havdalah at home.

My love and passion for Hashem and Judaism has not changed. It is my way of life, and I am eternally grateful for Rabbi Leon's life and for his love for the Anusim . . . which has permited some of us to regain our Jewish roots…

Thank you so much Gloria for taking the time to write this book about the Anusim and at the same time, helping others that are searching as we were, and finally made it back."

Gloria Golden was born in Brooklyn, New York. For twenty-three years she taught in the New York City elementary schools. Remnants of Crypto-Jews Among Hispanic Americans, her first book, was published by Floricanto Press in 2005. She interviewed eighty descendants of Jews from the Spanish Inquisition in New Mexico and El Paso, Texas. Sixty oral histories, accompanied by photographs, have been published in the book. Many descendants from Spain and Portugal continue to practice Jewish rituals, often without knowing their origin. Only those willing to reveal their stories could shed some light on how remnants of Judaism, however diluted, were brought forward into the twenty-first century. Based on her work, Gloria Golden exhibits and gives slide presentations across the United States.